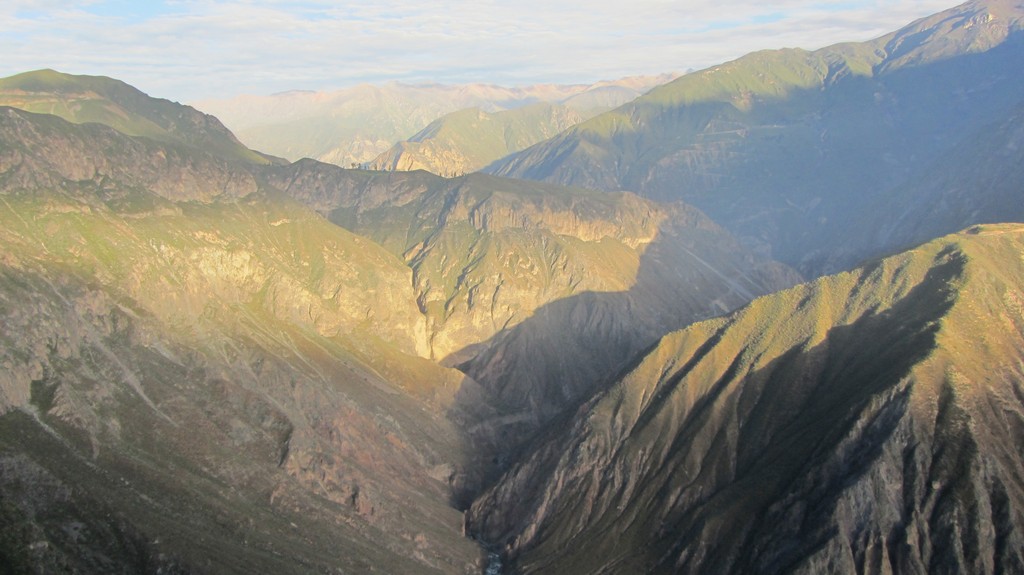 First I wanted to do Colca Canyon, which was a six hour bus ride away from Arequipa, on my own, but as I’ve heard, that doing all the organization through the hostel was almost the same price, I decided to do it that way.

For this two-day-trip I got picked up at 3am at my hostel. I was hoping that I could get some sleep on the bus, but as it was too crowded and roads were too bad, this should remain a hope….
At 7.30 we arrived at Chivay, the main village in that region, to get some breakfast. After that we continued to Cruz del Condor, where we could watch some of the biggest birds, that are alive. Condors have a wingspan of more then three meters.
With some pictures in my camera, we continued towards Cabanaconde, a small village at the ridge of the Canyon. From there we started to hike almost 1500m downhill to the Colca River. After a lunchbreak in one of the small villages in the Canyon, we continued another five hours to Oasis, the place where we were sleeping tonight.
As I’m quite sceptic regarding organized tours, I was quite surprised, that our guide let us walk our own speed and stopped us only at certain points, where he explained some stuff about local culture and local flora and fauna.
After some beers, dinner and a short, but quiet night, we got up the next morning around 4am and started to hike the 2.5 hours steep uphill to the ridge of the Canyon. We got some great views and could see the Inca terraces and all the mountains that were surrounding that green valley. After a break at the ridge of the Canyon, we arrived quite hungry at Cabanaconde around 9.30 and got some breakfast.
After that we went to a place where we could see the beginning of the Canyon and continued back to Chivay for lunch. In the afternoon we stopped a one of the passes at almost 5000m where you should theoretically see some active volcanoes. Due to some clouds we couldn’t see anything. In the late afternoon we arrived tired, but happy back in Arequipa and I prepared for my nightbus to Cusco.