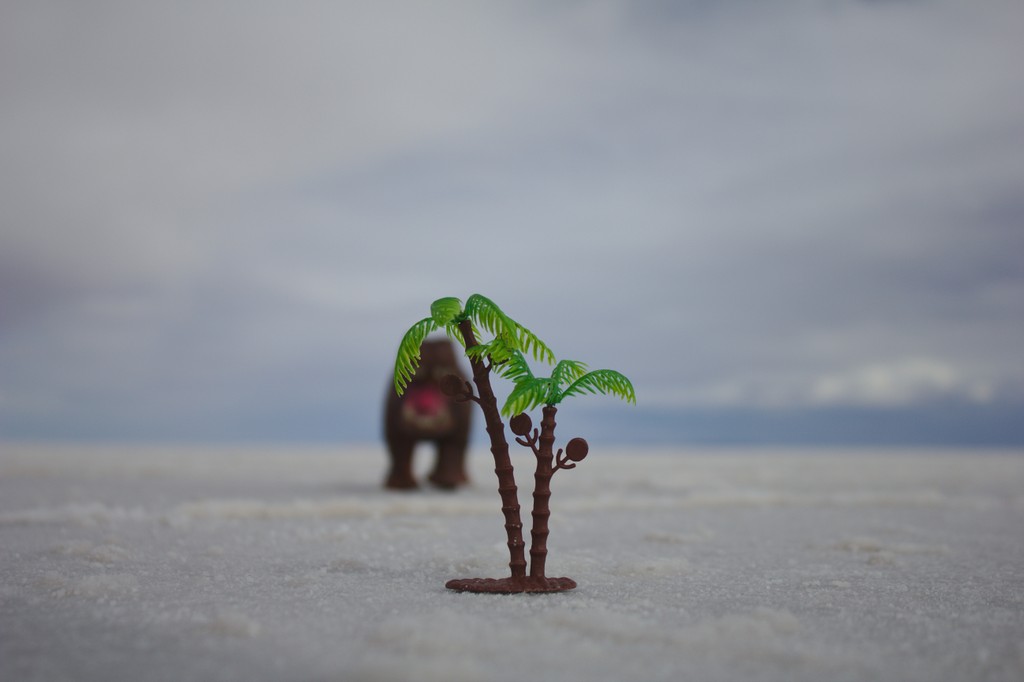 These three days should by my highlight in Bolivia.
In the morning before the tour started, I mixed up the times and waited at 7.30am instead of 10.30am in front of the office from the company. This should give me enough time for a breakfast and some “sightseeing” in Uyuni itself.

There was not too much to see, so I waited just in the sun and finally I was back at the office a few minutes past 10 to wait for the departure. It was six of us in the Jeep – five Israelis, who just finished their army, and me. Unfortunately it should turn out soon, that they were just too lazy too speak English, and so I had hardly any conversation for the next three days. Only one of them included me sometimes in their conversation, but still… it was quite boring most of the time.
Our first stop of the tour was the cemeterio de trenes, where some trains where rusting between the salt flats and Uyuni city. After that we went for lunch in one small village before heading into the saltflats itself. Crossing the saltflats, taking lots of pictures, playing around with the perspective and a nice hike on Isla Incahuasi. In the evening we arrived on the other side of the saltflats and were sleeping in a hotel made of salt.
The next morning we had breakfast at 6am and continued towards the Chilenian border. There we could see one semi-active volcano and while sitting in the car the air got thinner and thinner and was dust dry. Having a look at my GPS it told me, that we were already at an altitude of 4500m. It was really strange to drive in a landscape, where it looked more like being on Mars then on Earth. Great colours including green, white, red, black and yellow, different lagoons and yes, there was some life as well. At many of the lagoons that where there, we could see Flamingos and other birds. At one of the lagoons, I met Mark, a guy from Ireland, whom I met already a couple of weeks before in Iguazu. My personal highlight of the day was visiting the Arbol de Piedra, a rock formation which looked like a tree.
In the late afternoon we arrived at Laguna Colorada, where we were sleeping in a basic hostel. No hot water, but at least they had light in the rooms.
On the last day of the tour we got up at 4am and were driving to some Geysirs at almost 4900m where we arrived at sunrise. With -15 degrees it was quite cold, be the views were great. After that we continued through the Salvador Dali desert to the Laguna Verde, which was not green at all. Our guide told us, that there must be loads of wind to see the colours. On the way back from Laguna Verde we stopped at some thermal baths, where we jumped in. This was my first swim in this altitude. 🙂
After having lunch in one of the small villages in the middle of nowhere, we continued back to Uyuni.
In Uyuni I met Mark again and we killed the time until my bus to La Paz left with drinking beer in a pub.

All in all the tour was really well organized including good food and accomodation, but if the people in there are too different, the whole tour can be ruined. For me it was already the second experience, where I couldn’t deal with my tour partners after the trip to Western Mongolia last year.

41 thoughts on “3 day tour through the Salar de Uyuni”